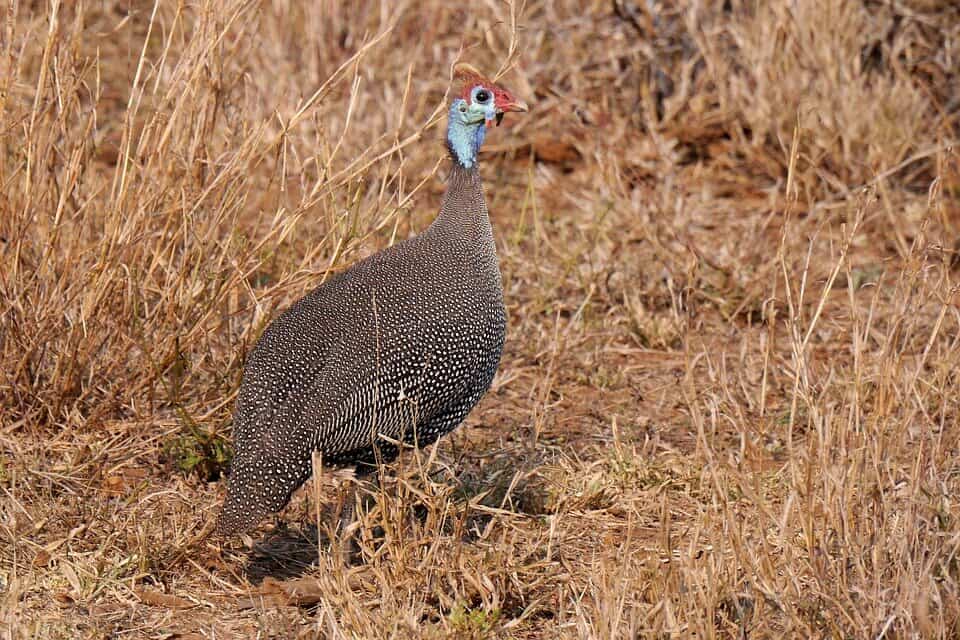 Although it is rare to see Guinea Fowl in large numbers across the British Isles, they are certainly there and although many are escaped birds from breeding farms; they bring an interesting diversity to the British Countryside.

And of course they produce fantastic meat and are often found on the menus of British Country Pubs and restaurants.

Guinea fowl have also been on some of the most popular prints featured within our Hartwell Women’s Country Shirts. and keep a look out as we have a brand new camouflage guinea fowl design coming very soon as part of he new special Game Fair Collection.

Read on to find out more.

Historically, the Guinea Fowl are natives of Africa and have been introduced into the UK in some numbers, primarily for breeding as food.

Their history as a species is considerable to say the least and can be traced back as far as ancient Egypt with drawings of Guinea Fowl being found on the walls of pyramids.

It’s hard to establish when they first came to the British Isles, but they are not only popular on the dinner table but also loved by gamekeepers as a noisy protector of an estates Pheasant population.

The most popular and widely found guinea fowl in Britain are the helmeted guinea fowl (numida meleagris) and despite hailing from a warmer climate they seem to have adapted well to the British Countryside.

You can find out more about keeping Guineas and breeding them by visiting Guinea Fowl UK.

In the wild Guineas are foragers and very unfussy eaters living on grubs, insects and fallen berries or buds.

They are relatively easy to keep as free range birds and in the winter months can be fed with pellets and corn.

As well as being highly popular for their meat, Guinea Fowl eggs are delightful and full of earthy flavour.

Although wild Guinea Fowl walk for some distances, they are very accomplished flyers with powerful breast muscles and can sustain a lengthy flight if required because of predators.

Similarly to Geese (as in the fabled alert to the citizens of Rome) Guinea Fowl are now often used by pheasant keepers to alert them of the presence of predators, but also farmers are known to use them.

Their shrill cackle can be heard some distance away, and the entire flock often backs this. They are very alert to natural predators like rats, stoats, hawks, etc.

As mentioned, their other significant quality is when roaming free around farmland they will often alert farm hands and farmers to the presence of intruders.

Find out more about these delightful birds at Guinea Fowl International.

You will certainly know when you come across wild Guinea Fowl as they will loudly defend their territory if you get too close.

So keep your eyes open on those long summer evening countryside walks, when you’re enjoying our great British Countryside.

And of course, make sure you’re dressed the part in Hartwell’s extensive range of women’s country clothing.